For a small Karoo town, Montagu announces itself with excessive pomp and circumstance. As you enter Cogmans Kloof, farmlands are sealed off by walls of sandstone carved into cathedrals of columns and hewn into jagged battlements.

The road twists through a narrow valley, then dives straight through rock. On the other side of the tunnel, topped with an old English fort, a clutter of cliffs extracts more bends and gasps, then gives way to a bridge over a broad river and the town’s lazy main street .

Until Thomas Bain built this pass in 1877, the town was relatively cut off from the rest of the country by this rocky mountain valley. These days, thanks to year-round sunshine and a multitude of bolted crags, it’s one of the top hotspots for sport rock climbing. Some of the best climbers in the world come to Montagu. Some, like South African legend Ed February, never leave.

You don’t have to be the world’s best climber to enjoy scaling Montagu’s rock faces. You don’t need to have climbed at all. There are as many beginner-level options as there are scarily insane ones, and there are two very experienced local climbers, Justin and Riki Lawson, who can show you the ropes.

My friend Ilhaam Ismail and I were polishing off a hearty brunch at the Kloof Padstal when Justin arrived to take us on our first climbing lesson. Five minutes back along Cogmans and through the tunnel, Legoland is probably the most popular crag in Montagu and ideal for novices. It’s quick and easy to get to, the routes aren’t long and the grips are easy to spot, as they’re covered in chalk left by the hands of hundreds of other climbers.

Justin prepared a route called “Life and Times of Mike Hunt”, a fun grade 15, easy enough for absolute beginners but sufficiently challenging to get your heart racing. He left the rope threaded through the two anchor chains at the top so that Ilhaam could use it to top-rope. This meant that, even if she let go of the rock completely on her way up, she would only ever “fall” a couple of centimetres.

“These shoes are much too small for me,” said Ilhaam as she tugged on the rubber-soled pair.

“I’m afraid that’s how they’re meant to be,” grinned Justin. “The tight fit gives your feet maximum grip and control on the rock.”

Ilhaam put on her harness next and Justin made sure she’d double-backed all the straps for safety. After he’d shown her how to tie herself in using a figure-of-eight knot, it was time to try her first climb.

Climbing is almost always done in twos. One person climbs while the other, the belayer, has the responsibility of controlling the rope: letting it out when the climber is going up and keeping it tight when there’s any chance of a fall. The belayer has another job: encouraging when things get tough.

To Ilhaam’s credit, she didn’t need much motivation. Hesitations were quickly overcome with hints from Justin: “Try that grip over to your right,” and “Get your legs up first.” In a matter of minutes, she’d scaled the route and was victoriously shaking her fists at the top.

“Whoo! That was great! Now how do I get down?” she called. It took some time for us to convince her that letting go of the rope and stepping backwards off the precipice was the preferred method of descent. “It’s really fun, I promise!” I shouted, already familiar with the knee-jellying sense of staring down at the dizzying distance you’ve come up. Ilhaam gingerly crept backwards over the edge. And stayed there.

More slow progress as she clung to the rock face. Eventually deciding to trust the two mad people, she leaned back into the harness and pushed out with her feet. Seconds later she was on the ground with a big grin. After a couple more climbs, the only persuading Justin needed was to get us to leave.

We spent a day exploring Montagu’s less nerve-wracking attractions before it was my turn to try something new and terrifying. From Justin and Riki’s place, we took a short hike to a magnificent crag they’d recently bolted, called The Bold and the Beautiful (climbers have a talent for naming things).

I was going to attempt a lead climb. This is when the climber clips the rope into bolts along the way. What makes this a daunting prospect is that you stand the risk of a real fall. It’s not enormously dangerous, as you’ll “only” fall double the distance you’ve climbed past the last bolt. These are seldom more than three metres apart, so you shouldn’t come to any harm – in theory. I was reluctant to test this.

Justin sent me up a route called “Duidelik” – a grade 17 that didn’t pose any tricky technical problems. Incredible views of Cogmans Kloof and Montagu stretched out, but all I paid attention to was the lichen-covered rock towering above.

The first few metres went fairly well, except that I seemed to have clipping dyslexia. You’re supposed to clip the rope into the quickdraw – a pair of karabiners that attaches the rope to the bolt – using one hand. The climbing end should come out towards you. I kept using both hands and putting the rope in the wrong way round. This made things more interesting, especially for Justin, who had to relay instructions from the ground.

Then it happened. I reached a point where I froze. Riki’s voice penetrated the fog of fear. “Look down to your left – there’s a small ledge there. Step sideways, then you can reach that grip above you.” At the top, I could relax and breathe. Far beneath me, tiny cars were driving through Cogmans Kloof along a ribbon of road dwarfed by golden rock I now realised was the most appropriate way to get to know Montagu.

For the full story, see the January edition of Getaway magazine. 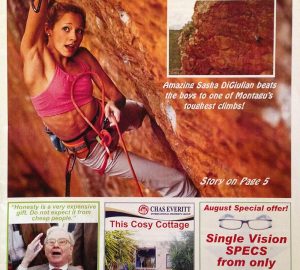 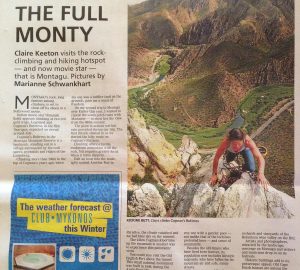 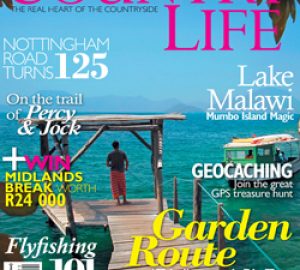 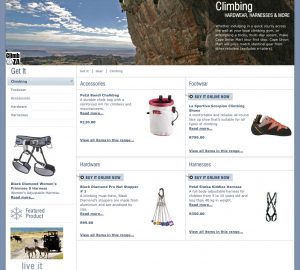